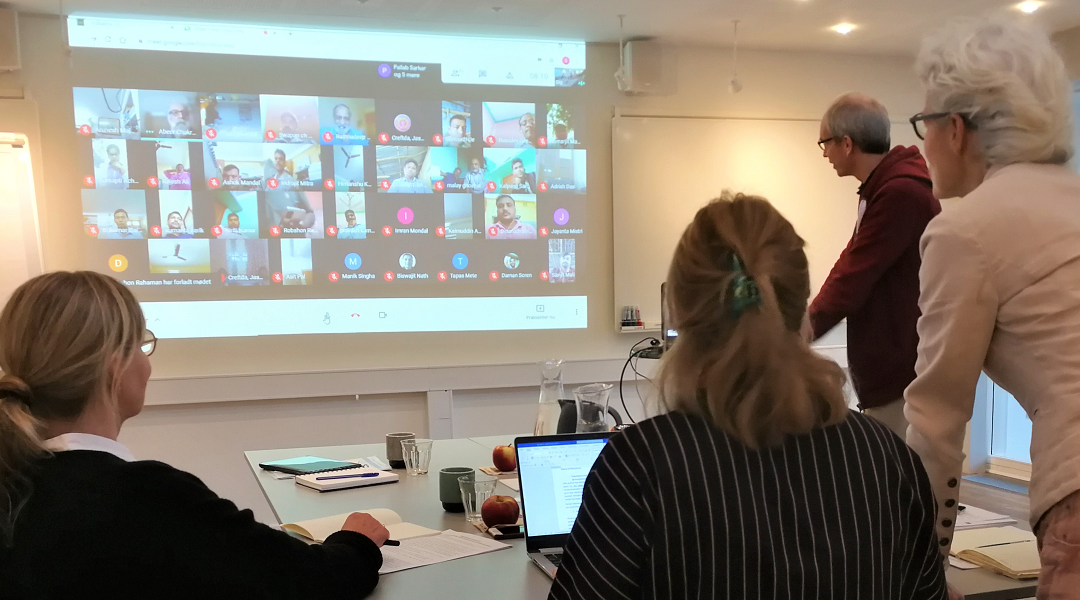 At this time of year, the board of iiINTERest usually zips their backpacks and travels to India on project visits. But this year, ‘usually’ does not exist. Due to the Corona pandemic it has been impossible to travel. Instead, this year’s monitoring and project visits have been held virtually via an online internet-connection to India – albeit with our planted on Danish soil.

From November 2nd to 4th, ii’s board spent three virtual days in online company with Ahead’s board and staff as well as with representatives from the local CSO partners. As can be seen in the picture, we had rented conference facilities, in order to have secure access to technical assistance in case of any quarrels with either the wifi-connection or the projector. During the three days, we went through the usual procedures for monitoring both accountancy and organizational management, and yet again we saw evidence that Ahead meet such criteria with great responsibly and professionalism. In addition (and with help from the internet gods), we managed to establish contact with every nook and cranny of the project areas, from where the local partners could report on the past year, tell stories of success from the field and describe the challenges that both Covid19 and a number of other matters has created in relation to the project activities. Among the biggest challenges were 1) the six-month shutdown of the Indian society, including the public schools in the villages, which has made the execution of majority of the activities on the education project impossible 2) the heavy monsoon rains and the aggressive weather conditions that have destroyed numerous initiatives related to natural resource management, 3) the many migrant workers who have returned from the cities, which has caused a pressure on the food situation and created a demand for more alternative livelihoods in the rural areas, as well as 4) party political conflicts in the various levels of government, which has posed a threat to advocacy endeavors and cooperation with local authorities. But even though the challenges have been queuing up, there were also reports of significant stories of success from the project areas. The harsh conditions have in many places created greater mobilization among villagers, and many families have begun to organize activity groups, where they cultivate unused land and roadsides. In several areas, the local authorities have realized the importance of the rural population having access to their own food and locally relevant education, and they have entered into collaborations with local organizations to spread Ahead’s projects to more district areas.

Despite the fact that the ‘visit’ has been significantly shorter than usual, and offered significantly fewer sensory impressions for both palate and nose, we had three productive days where we saw the optimism in the eyes of the Ahead members and felt their eagerness to continue to make a difference for the rural populations with which they work.